Lisa & Cowboy share their experience from Riding with Pat Parelli at the Master Class Clinic, March 10-11 2018! 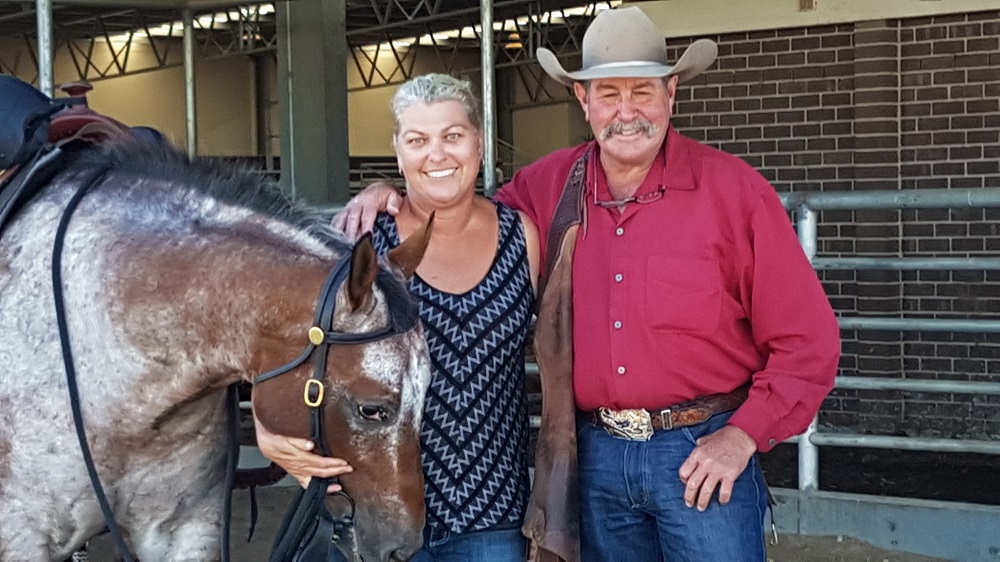 4 weeks before Pat was to ride in Sydney I got the call I was riding. I was so excited. Then reality set in. Am I going to be good enough? It’s Pat’s Master Class! And I only had my level 2 for a few months, we had no idea what we were to be doing and was I good enough? There was a number of times I thought I should just pull my application and once I got the phone call I was riding, well I’m glad I only had 4 weeks to worry about it because I don’t know how many times I thought “what am I doing!!!”. But I was able to put the negative aside and during that 4 weeks practice trying to keep myself calm and not get too excited as I was worried I was going to explode with excitement.

During that 4 weeks I only had a few days the work before to prepare Cowboy so I just kept practicing stuff from David Grace’s clinic last September and I practiced riding in circles and patterns on a loose and collected rein. And I had to put a bridle on him first time in about 4.5 years and I was surprised how well he went.

My friend Margaret Urfer came with me to for moral support. We went up a day early for Cowboy to settle in but really I think it was for my head. We finally got there even with a nail stuck in our trailer tyre.

Getting up there the day earlier was great. I was able to walk him around to get us both familiar with the place and had a few plays in the outside arena. My only nerves now was to get to Saturday on time and not be late. We managed that.

8am we had to be inside warming up. We did a bit of playing to warm up but thought it best I do a lot of walking around and letting him check the place out before we started. We were calm and both in a happy place.

Then Pat came in. Introduced himself to all of us and it was time to start.

He is such a good horseman and a good teacher. We leant so much but had such a blast as well. Pat getting us to ride with one hand, which I thought was great and showing us how to get the most out of it. I loved it, as I prefer riding with 1 hand. I just had to remember not to neck rein.

At one time we were doing circles and Pat kept telling me to put my leg back. Further. Further. Further!. I was laughing so much I felt like I was going to fall off and had to stop looking sexy with my hand on my hip to power position on my horn just to stay on. I could hardly breath from laughing. The 2 days if I wasn’t laughing, I was singing and if I wasn’t doing either of them I was talking me and cowboy through what we were doing. It was so fun.

In the group we had a few that had horses that were holding their heads high. Pat had them long reining, which was so interesting to watch the changes in the horses so quickly.

Another thing I loved Pat teaching us was is your going to do stuff in an arena do it to music. Dance with your horse! He had us dancing with our horses with what we had learnt over the 2 days. And another thing I loved was when he told us get out and ride on the trails and practice out there so its more fun for us and the horses. That was music to my ears.

Pat stirred me up a few times because I was on an appy. One thing He said was “do you know why Indians used to ride appys? It was so by the time they got to where they were fighting it made them really good fighters”. Little does he know I have had cowboy up for sale twice in the last 2 years because of his attitude. But glad, through the Parelli program I learnt to change my attitude and he’s not going anywhere now. Ever.

And I would like to thank Dave for being so approachable and helpful while I was there. Had a little hiccup Saturday afternoon and he sorted the problem for me

I absolutely recommending riding with Pat to anyone. He is such a good teacher and he is patient and easy to understand And its so fun. If you get a chance try not to be nervous. Just laugh sing and enjoy the experience. I loved it

This site uses Akismet to reduce spam. Learn how your comment data is processed.