My horsemanship Journey with Parelli, so far! 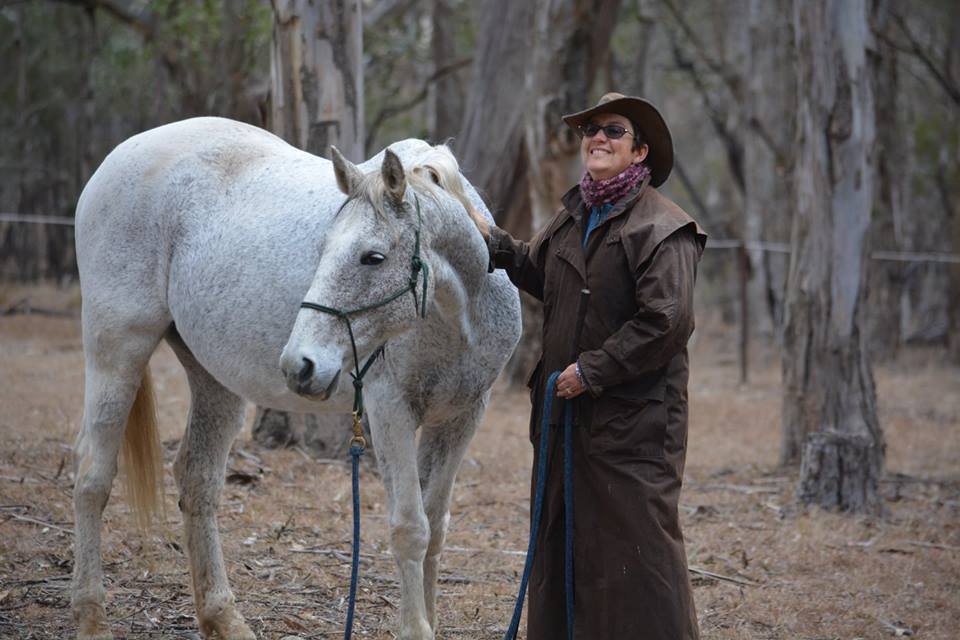 Hi, my name is Catherine Ronan and I am 47 years old. I always loved horses as I was growing up in the UK but only got to have a few lessons. I did get to ride most Saturdays, going for short trail rides in my early teens, until studying became my focus. So I never realised my childhood dream of horse ownership. Through my 20’s and 30’s I took every opportunity I could to go trail riding. Most holidays all over the world I would fit in a trail ride and saw myself as a competent rider able to walk ,trot and canter.

I emigrated to Australia in 2003 and in 2007 we bought a property on acreage Southwest of Sydney and at last, in 2014, I got my first horse. Of course, I knew nothing about owning a horse and quickly realised I had a steep learning curve. All the horses I had ridden had been presented to me tied up with a saddle and bridle on. I only knew how to take them off, not how to put them on! I trialed a few horses, learning a little bit more with each one, but they all quickly realised I had little idea of what I was doing. In Feb 2015 I bought Beau, a gentle and quiet, flea-bitten grey, 15 year old gelding.

Over 2014 I had researched all about horse handling and riding, but found the information overwhelming and at times confusing. For example, I had no idea what leg aids meant. It clearly must be more than pressure from my leg because when I did that, Beau completely ignored it and pushed through. I decided there must be some secrets that no one was telling me on these websites. what I did see though were videos of people riding their horses bridleless, in unison with their horse with no bracing and I thought that is how I want to ride my horse, that is my dream, but had no idea how to even start.

In April 2015 I trialed the Parelli Savvy Club for one month free. I watched the Level 1 videos every night. I would watch the video through, then watch it again taking notes and then watch it a third time and check I had understood it and taken down the notes correctly. I did that every night for a month as I knew after that I would no longer have free access. I was still skeptical as the website looked fancy and I worried it was all marketing and no substance. I then went and practiced. It was great, I learnt how to lead my horse safely and how to teach him manners on the ground and how to protect my space so I could be safer around him.

In June 2015 I fell off Beau, well technically I elected to fall off after becoming unbalanced in the canter. He got scared as I was trying maneuver myself back into position so I thought it would be best to fall off than to try and regain my balance. This was the wrong decision, as I fell awkwardly and broke my arm.

By November I had enough strength to start ground work again, and still using my notes from the one month free trial we continued our journey, slowly. I started to get stuck, Beau is RBI and I quickly taught him that if he came to me I would stop and pet him. So we made great gains on rapport, but I was steadily losing in the respect department and I couldn’t get him to do anything as he was always there, right there, in my space. So I joined the Savvy Club in Jan 2016 so I could access more videos and then I booked us both into a clinic. In May 2016 we attended the Get Started, Safe and Savvy Level One clinic. We were both nervous, but the staff and other students at the clinic were really friendly. That first clinic was so stressful. The whole weekend I had to have eyes in the back of my head to see what Beau was up to because when we stood around and watched others or listened to Neil, Beau would not stand still. It was exhausting managing him, while trying to listen and learn. But learn we did, I learnt to keep him away from me and started to manage him through time and space. I was so tired at the end of that first weekend and felt I needed another weekend immediately to recover!

We passed our Level one in September 2016 and level two in June 2018 as we have continued on our journey, attending clinics ( much less stressful as I can expect Beau to stop where I ask him to stay), meeting up with other Parelli students for play dates, some private lessons and of course practicing and practicing new skills at least twice a week. Beau has changed from a very introverted horse, who would walk backwards when asked for forwards and brace and fight every turn I asked for, to a horse who is now confident enough to look at me most of the time and starting to synchronize with me when I am riding him. At times he is even showing signs of curiosity. I am looking forward to seeing more of the curious and playful side of Beau as our journey progresses, and he is hoping to have a more balanced rider and an owner who is consistent and courteous and clear in her requests.

The Parelli program has enabled me to be brimming with ideas of what we are going to do every session, their instructors have been able to show me the little, yet important, mistakes I have been making and therefore keep me on track and I have found a community of positive, non-judgmental horse loving friends.

This site uses Akismet to reduce spam. Learn how your comment data is processed.